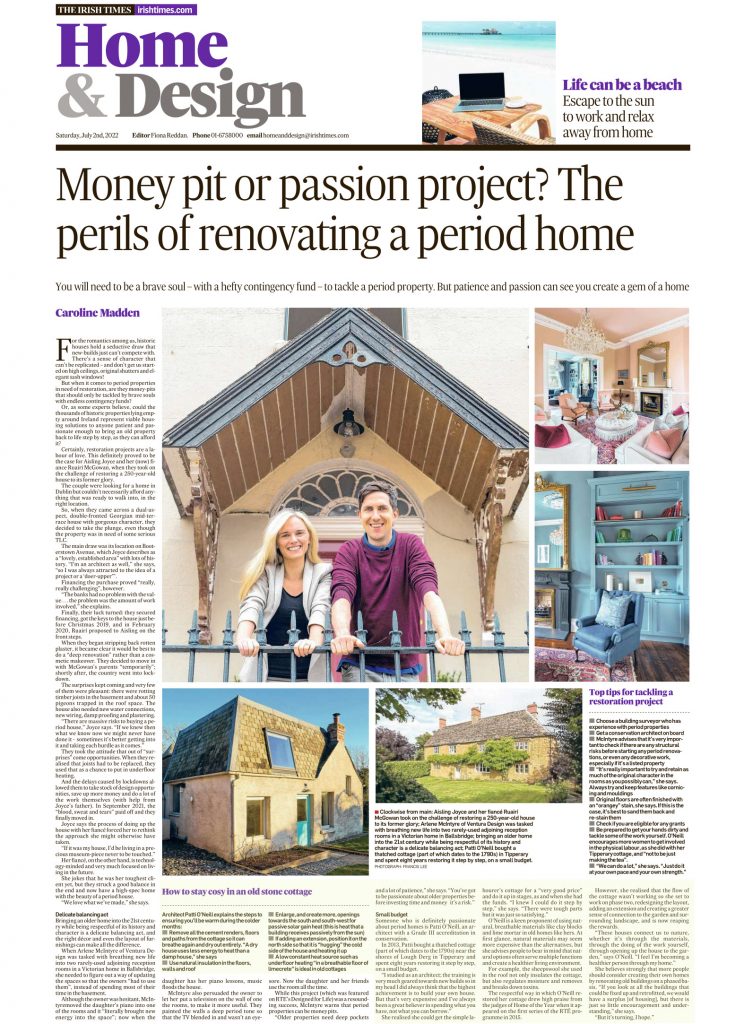 Architect Patti O’Neill talks to Caroline Madden on How to stay cosy in an old stone cottage.

Someone who is definitely passionate about period homes is Patti O’Neill, an architect with a Grade III accreditation in conservation.

In 2013, Patti bought a thatched cottage (part of which dates to the 1790s) near the shores of Lough Derg in Tipperary and spent eight years restoring it step by step, on a small budget.

“I studied as an architect; the training is very much geared towards new builds so in my  head I did always think that the highest achievement is to build your own house. But that’s very expensive and I’ve always been a great believer in spending what you have, not what you can borrow.”

She realised she could get the simple labourer’s cottage for a “very good price” and do it up in stages, as and when she had the funds. “I knew I could do it step by step,” she says. “There were tough parts but it was just so satisfying.”

O’Neill is a keen proponent of using natural, breathable materials like clay blocks and lime mortar in old homes like hers. At first glance, natural materials may seem more expensive than the alternatives, but she advises people to bear in mind that natural options often serve multiple functions and create a healthier living environment.

For example, the sheepswool she used in the roof not only insulates the cottage, but also regulates moisture and removes and breaks down toxins.

The respectful way in which O’Neill restored her cottage drew high praise from the judges of Home of the Year when it appeared on the first series of the RTÉ programme in 2015.

However, she realised that the flow of the cottage wasn’t working so she set to
work on phase two, redesigning the layout, adding an extension and creating a greater sense of connection to the garden and surrounding landscape, and is now reaping the rewards.

“These houses connect us to nature, whether it’s through the materials, through the doing of the work yourself, through opening up the house to the garden,” says O’Neill. “I feel I’m becoming a healthier person through my home.”

She believes strongly that more people should consider creating their own homes by renovating old buildings on a phased basis. “If you look at all the buildings that could be fixed up and retrofitted, we would have a surplus [of housing], but there is just so little encouragement and understanding,” she says.

How to stay cosy in an old stone cottage:

Architect Patti O’Neill explains the steps to ensuring you’ll be warm during the colder months:
■ Remove all the cement renders, floors and paths from the cottage so it can breathe again and dry out entirely. “A dry house uses less energy to heat than a damp house,” she says
■ Use natural insulation in the floors, walls and roof
■ Enlarge, and create more, openings towards the south and south-west for passive solar gain heat (this is heat that a building receives passively from the sun)
■ If adding an extension, position it on the north side so that it is “hugging” the cold side of the house and heating it up
■ A low constant heat source such as underfloor heating “in a breathable floor of limecrete” is ideal in old cottages