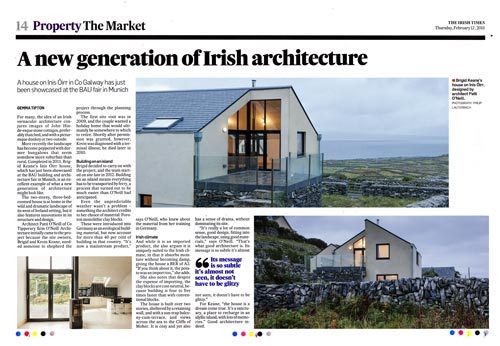 A house on lnis Oirr in Co Galway has just been showcased at the BAU fair in Munich.

For many. the idea of an Irish vernacular architecture conjures images of John Hindeesque stone cottages, preferably thatched and with a picturesque donkey or two outside.

More recently the landscape has become peppered with dormer bungalows that seem somehow more suburban than rural. Completed in 2013, Brigid Keane’s lnis Oirr house, which has just been showcased at the BAU building and architecture fair in Munich is an excellent example or what a new generation or architecture might look like.

The two-storey, three·bed·roomed house is at home in the wild and dramatic landscape or its west or Ireland setting. but it also featurcs innovations in its structure and design.

Architect Patti O’Neill of Co Tipperary firm O’Neill Architecture initially came to the project· because the site owners, Brigid and Kevin Keane, needed someone to shepherd the.project through the planning process.

The first site visit was in 2009, and the couple wanted a holiday home that would ultimately be somewhere to which to retire. Shortly after permission was granted, however, Kevin was diagnosed with a terminal illness; he died late in 2010.

Building on an island

Brigid decided to carry on with the project. aod the team started on site late in 2012. Building on an island means everything has to be transported in by ferry. a process that turned out to be much easier than O’Neill had anticipated.

Even the unpredictable weather wasn’t a problem – something the architect credits to her choice or material!: Poroton monolithic clay blocks.
These were introduced into Germany as an ecological building material, but now account for more than 40 per cent or building in that country. “it ‘s now a mainstream product” says O’Neill, who knew about the material from her training in Germany. ·

And while it is an imported product, she also argues it is uniquely suited to the Irish climate in that it absorbs moisture without becoming damp, giving the house a BER of A3. “If you think about it. the potato was an import too.” she adds. She also notes that despite the expense of importing. the clay blocks are cost-neutral, because building is four to five times raster than with conventional blocks.

“It’s really a lot or common sense. good design, fitting into the landscape, using good materials”, says O’Neill. “That’s what good architecture is. Its message is so subtle it’s almost not seen, it doesn’t have to be glitzy.”

For Keane, “the house is a dream come true. It’s a sanctuary, a place to recharge in an idyllic is.land, with lots of memories.” Good architecture indeed. 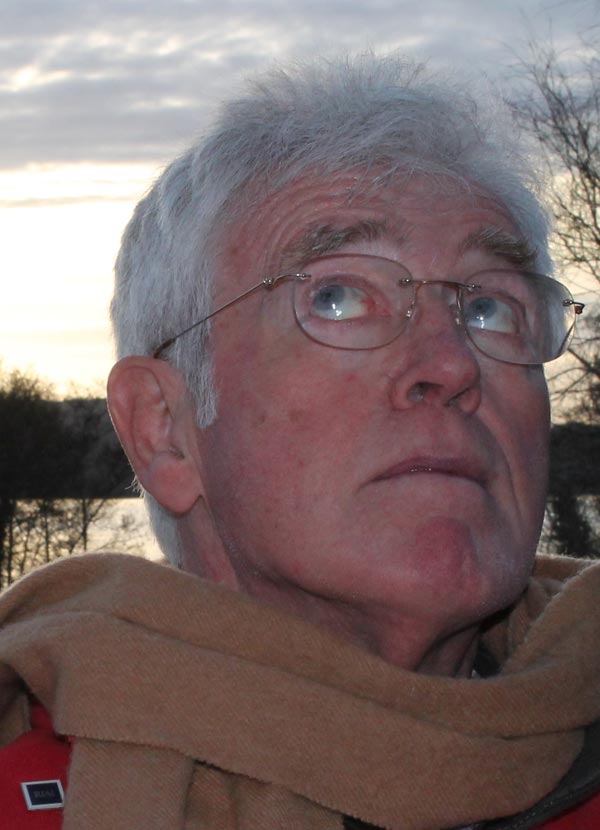